In this book, Mat Staver lays out the clear biblical and historial basis for bringing America back to her roots. “God is the foundation of good government and national prosperity…America is broken…Something must be done. America doesn’t need another program. Money won’t fix our problems. Articulate politicians will not save us. We need God in America again.”

America’s Godly Heritage clearly sets forth the beliefs of many famous Founding Fathers concerning the proper role of Christian principles in education, government, and the public affairs of the nation. The beliefs of Founders such as Patrick Henry, John Quincy Adams, John Jay, George Washington, Thomas Jefferson, and many others are clearly presented. It also provides excerpts from court cases showing that for 160 years under the Constitution, Christian principles were officially and legally inseparable from American public life.

Discover the keys to good government by investigating the wise counsel and instruction given to us by leaders like William Penn, Benjamin Rush, Noah Webster, John Witherspoon, John Adams, Fisher Ames, George Washington, and many others. The information in this transcript not only stands in stark contrast to many contemporary teachings surrounding civic responsibilities, it also shows how we as Americans can reclaim the quality of government we once enjoyed.

Former Representative from Ohio explains the principles of freedom & free enterprise and why these precious commodities should be highly valued and guarded from too much government.

BOOK 5God is the Issue by Brad Bright

Brad Bright peels away the superficial layers that encase the core issue of our times and reveals that the most important issue is God himself. A highly committed group of individuals can do much to bring God back to the fore of culture discussion, and reading this book might just motivate you to become one of those individuals.

BOOK 6 Is America One Nation Under God? by Rick Green

In this transcript of Rick’s most popular presentation, he takes a look at our founding fathers, our supreme court, and our founding documents to see if history determines whether or not our nation was founded on biblical principles. 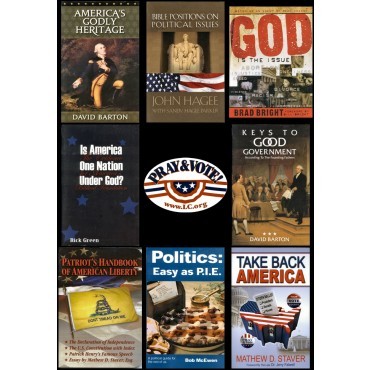