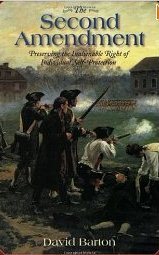 The Second Amendment, Preserving the Inalienable Right of Individual Self-Protection, by David Barton

The Second Amendment has become one of the most controversial parts of the United States Constitution. That Amendment, written in 1789 by the First Congress and ratified in 1791 by the States as part of the Bill of Rights, states: “A well regulated militia being necessary to the security of a free state, the right of the people to keep and bears arms shall not be infringed.”  http://wallbuilders.com